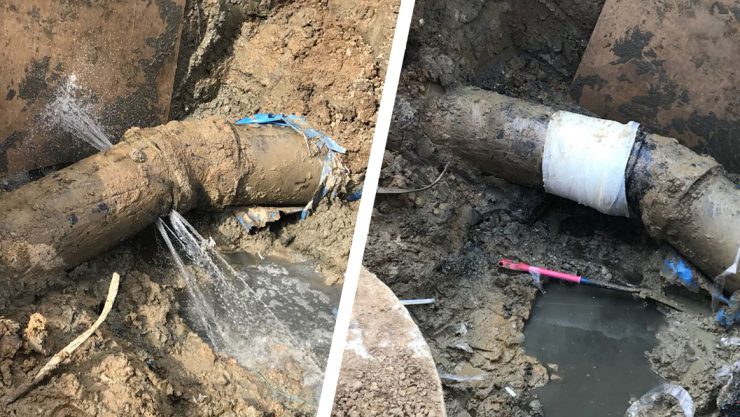 The contractors working at the Wastewater Treatment Works in the United Kingdom mistakenly believed the pipe in question had been decommissioned and was due for removal. In actual fact, it was one of the most important live pipes on site as it was linked to all the waste treatment ponds. As a result, there was no feasible way to stop the flow once the pipe had been breached.

From the moment the pipe was damaged, the severity of the cuts inflicted to such a highly pressurised pipe resulted in a significant amount of contaminated water escaping. A rapid, live leak repair to the wastewater pipe was therefore required to prevent a catastrophic situation from occurring.

The contractor contacted Sylmasta for urgent assistance. Luckily, the Wastewater Treatment Works was located less than one hour from Sylmasta HQ and so our technical team were able to rush all the SylWrap Pipe Repair products needed to the site and offer assistance throughout the repair.

Several Wrap & Seal Pipe Burst Tape were first applied to the pipe. Wrap & Seal is made from self-fusing silicone which fuses to form a solid rubber band over the hole or crack, sealing the leak. The 450mm diameter of the pipe combined with the high pressure meant that multiple tapes were needed to provide an effective seal.

This initial repair was then overwrapped using a SylWrap HD Pipe Repair Bandage. SylWrap HD is a composite repair wrap with a water-activated resin which sets rock hard in 30 minutes, providing an impact resistant layer over the Wrap & Seal to protect the repair from further damage.

Within an hour of Sylmasta being on site, the contaminated water pipe had been permanently repaired at a cost of less than £300 to the contractor. This included additional SylWrap HD should there be any further mishaps or any existing pipes require strengthening or reinforcing during the construction works.

Had a live leak repair not been possible, then the Wastewater Treatment Works would have had to shut down the entire site to isolate the damaged pipe whilst a replacement was sourced and fitted. The cost of such a procedure would have been astronomical.

The speed of the SylWrap repair also prevented a serious environmental incident from unfolding. This could have been damaging in monetary terms through the cost of a clean up operation and possible fines, and for the reputations of both the Wastewater Treatment Works and the contractor involved.

Understandably, the project manager was extremely happy with the speed and ease with which the contaminated water pipe had been repaired. He emailed Sylmasta a few days after the repair, saying: “Thank you so much, the pipe repair worked a treat.”

If you have an application you would like to enquire about, then please get in touch